a wet quilt
of leaves and grass...
stormy night

Recently, we read the following: 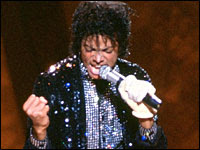 “Singer Michael Jackson, the man known as the King of Pop to legions of fans around the globe, who lived most of his extraordinary life in the public eye, died Thursday in Los Angeles after going into cardiac arrest. He was 50 years old….

“It used to be that Jackson's talent was the most compelling thing about him, says music critic Jody Rosen….

“And then came the charges of child molestation.

“Or an extended riff….

“Not long ago, Rosen was at a nightclub. Everyone there was too cool to dance. Then the DJ started spinning Jackson's early hits, one after the other.

" ‘As soon as he started playing those, the dance floor was stampeded,’ Rosen says. ‘The longer it went on, the more ecstatic the crowd got, and everyone was dancing. That's the image I'd like to remember MJ by: just sheer joy generated by his best music.’

“The Michael Jackson in his mind, Rosen says, was not a has-been, a controversy or a joke. He was a genius.”

… People are stunned all the more by Michael’s sudden passing because, in the last 5 years, he did keep a low profile for the most part. Out of sight, out of mind. People were practically unaware as Michael was being buffeted by storms -- emotional, legal, financial, etc. -- caused by child molestation charges being filed against him one after the other. Most will be kinder now….