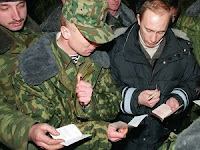 NPR: “Why 'GQ' Doesn't Want Russians To Read Its Story” by David Folkenflik

"For war journalist Scott Anderson, the most confounding part of his recent assignment for GQ magazine to explore the root of terrorist acts in Russia a decade ago wasn't the suggestion of treachery and subterfuge he found…

"It was the reception his story ultimately received in the United States.

"His investigative piece, published in the September American edition of GQ, challenges the official line on a series of bombings that killed hundreds of people in 1999 in Russia. It profiles a former KGB agent who spoke in great detail and on the record, at no small risk to himself. But instead of trumpeting his reporting, GQ's corporate owners went to extraordinary lengths to try to ensure no Russians will ever see it…

"He ordered that the article could not be posted to the magazine's Web site. No copies of the American edition of the magazine could be sent to Russia or shown in any country to Russian government officials, journalists or advertisers. Additionally, the piece could not be published in other Conde Nast magazines abroad, nor publicized in any way… "

…Conde Nast has decided to sequester significant information for what ends? It's a sad day when Big Business and Big Politics bare their stained teeth and decree that their ends take precedence over Journalism’s obligations...

Posted by Carlos Gesmundo at 7:21 AM