Recently, we read the following: 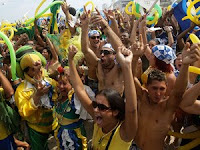 “Rio de Janeiro was chosen Friday as the host site of the 2016 Olympic Games, brushing aside an unprecedented personal appeal from President Obama and the first lady on behalf of their home town of Chicago.

“International Olympic Committee President Jacques Rogge, speaking in Copenhagen where the body voted, opened a ceremonial envelope and read off the vote of IOC members naming Rio as the winner. A huge crowd that had gathered in the Brazilian city sent up a roar of approval when the announcement was made.

“Rio's victory marks the first time a South American city has been chosen to host the games. ‘It is a time to address this imbalance,’ Brazil's charismatic president, Luiz Inacio Lula da Silva, told the IOC's members before they voted. ‘It is time to light the Olympic caldron in a tropical country…’ "

… It is not only time that the Olympic Games be brought finally to South America. In the context of North-South parity (or disparity), it is right. The colors of the Olympic flag will be much brighter in 2016 in the tropical sun…


Posted by Carlos Gesmundo at 7:14 AM